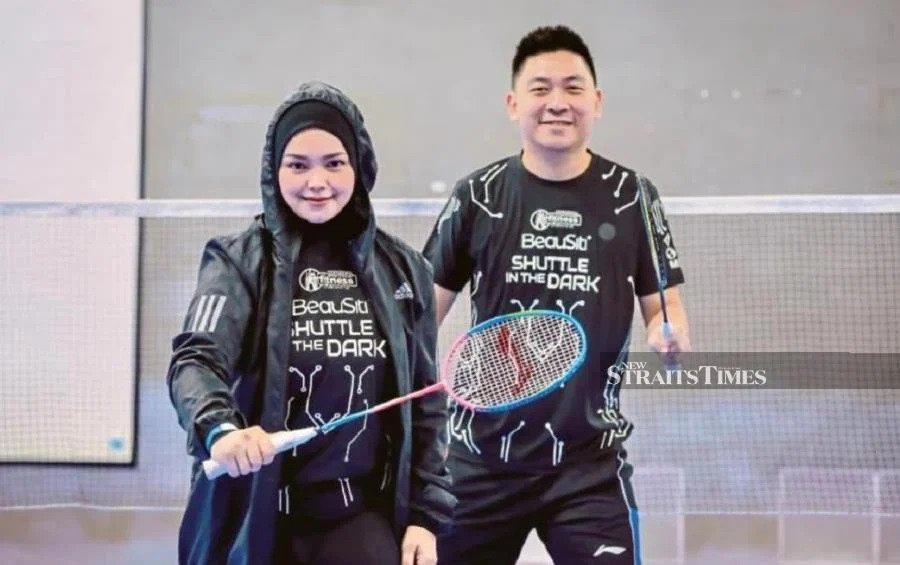 The match was part of the Mesti Smash Let’s Go event that took place at a Shuttle In The Dark court in the Twin Towers Fitness Centre in KLCC.

“I enjoy sports and physical activities including badminton and I myself, am a fan of our national badminton team.

“Sports activities are a way for me to relieve stress and to cultivate a healthy and calm mind, as well as to maintain stamina.

“But these activities are sometimes limited by a busy schedule involving family and my career,” she said in a news report today.

Siti who also enjoys cycling added that she was aware of many other artistes who adhered to a healthy lifestyle by indulging in various sports.

The Aku Bidadari Syurgamu hitmaker had also previously participated in sporting events that involved other artistes.

“My sister Siti Saida who also loves sports was also invited for this friendly match event. Same with former national badminton player Syahmi Irfan who is now a singer.

“I see many artistes who are good at badminton, netball, rock climbing and many other sporting activities.

“There’s the athlete’s spirit but it’s just limited by time to showcase their talents.

Talking about Boon Heong as a product ambassador, Siti explained that the former national champion had the right attraction and strategy to widen the market.

“After releasing a bird’s nest drink with a honey date flavour, I have come up with others with lemon and peach flavours.

“I’m grateful that these have been well-received by many regardless of race, religion or background.

“These bird’s nest drinks are well known in Chinese traditional medicine but have been thought to be expensive.

“But these types of drinks can now be purchased at reasonable prices with the best quality,” she said.

Meanwhile, Boon Heong revealed that his wife was a big fan of Siti.

“Who doesn’t know who Siti is? My wife is not just a fan but can sing her songs as well.

“I never expected that I would be collaborating with Siti one day. I accepted this offer not for the payment but in appreciation of the opportunity.

“Previously, I had only seen Siti from afar. But I never expected for the social media platform to bring us together.

“During our initial meets previously, I was awkward and nervous but now, we can be ‘ngam’ like friends,” he said.

The recent friendly match was organised with the purpose of appreciating customers and celebrating the success of Sitizens.

All prices in Malaysian Ringgit (RM / MYR). All prices above will subject to Malaysia Service Tax at 6% commencing 1 September 2018. The information contained on this website is for general information purposes only. The information is provided by beausiti.my and while we endeavor to keep the information up to date and correct as much as possible. When you visit or interact with our sites, services, applications, tools, or messaging, we or our authorized service providers may use cookies, web beacons, and other similar technologies for storing information to help provide you with a better, faster, and safer experience and for advertising purposes. Use of this Site is subject to express terms of use. By using this site, you signify that you agree to be bound by these Universal Terms of Service.