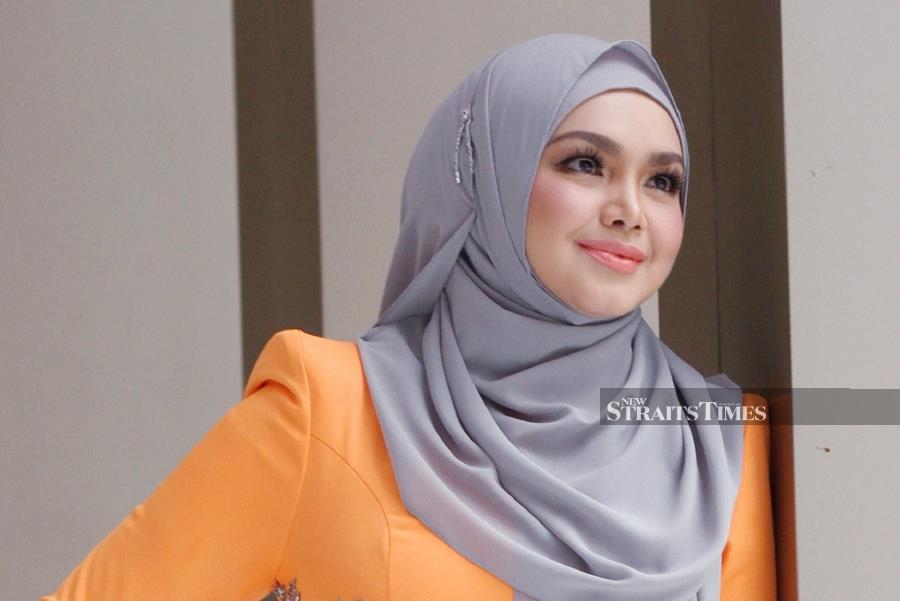 MULTI-award-winning singer Datuk Seri Siti Nurhaliza is an inspiration to many not only because of her singing and showmanship, but also her success in business.

Nine years ago, she founded her own skincare, cosmetics and fragrances line SimplySiti to provide women with a wide range of make-up products that are halal-certified.

It has since recorded a strong growth trajectory and is expanding to markets in Indonesia, Singapore and West Asia.

To maintain its relevance amongst the computer-savvy, SimplySiti has expanded its digital footprint since 2017 with the SimplySiti official store on e-commerce giant Shopee.

Siti is a pioneer of the Shopee Celebrity Squad which features several Malaysian celebrities’ home-grown products, and enables fans to meet and greet their favourite stars in on-ground events organised by Shopee.

The pop queen has, via SimplySiti, just inked a new collaboration with Shopee, this time roping in Islamic banking giant CIMB Islamic, to boost her brand’s presence in the e-commerce world.

This collaboration will benefit Siti’s fans by offering them attractive deals on SimplySiti products, a mini-concert and a chance to join the superstar herself for an afternoon tea party.

At the recent launch of her new collaboration with Shopee and CIMB Islamic at Grand Hyatt Hotel in Jalan Pinang, Kuala Lumpur, Siti said: “Since joining Shopee, our online business has grown phenomenally by more than 100 per cent, largely because of media-based events, fan engagement sessions and campaigns organised by Shopee such as the Shopee Brands Festival.

“However this is the first year we are co-organising a Super Brand Day, plus a mini-concert and afternoon high tea for Shopee customer,” she said.

Here shoppers got to enjoy up to 60 per cent off while CIMB Islamic credit card-holders will enjoy an additional RM15 off with a minimum spend of RM70 on SimplySiti products.

Other CIMB Debit, Credit and Prepaid card-holders enjoyed RM10 off with a minimum spend of RM70.

On Aug 5, fans tuned into Shopee Live and watched Siti talk about her products. The top spenders got to win some of her personal belongings.

Siti’s mini-concert will be at 8.30pm on Sept 14, at a location yet to be announced. Lasting 90 minutes, it is set to bring fans down memory lane with 15 of her biggest hits. Tickets are priced RM450 (Diamond) and RM350 (Gold).

Fans who spent at least RM250 on SimplySiti products during Super Brand Day will receive two tickets worth up to RM900.

The afternoon tea with Siti takes place at noon on Sept 18 in Grand Hyatt Hotel. It is exclusive to CIMB Islamic card-holders, and 15 winners will be part of this intimate affair with their partners, if they spent at least RM250 on SimplySiti products during Super Brand Day.

The SimplySiti Super Brand Day was in conjunction with the Shopee Brand Festival from Aug 1 to 18. Here, Shopee customers were treated to sweet deals and promotions, including deals as low as RM1 daily on branded favourites, 50 per cent discount vouchers and special gifts when they purchased selected products.

When asked about her new health drink for women, Siti said it was called Beausiti and developed over the last year with assistance from nutritionists from Universiti Kebangsaan Malaysia in Bangi.

On another note, Siti said she was very supportive of her younger sister Siti Saerah Tarudin’s daughter Umairah Saiful, 8, who participated in pre-teen talent search Ceria Megastar on Astro.

“Umairah has been singing since she was 4 and she is naturally talented. I’m confident she will go far, but Saerah and I believe she must complete her studies first and foremost,” said Siti, who gave her thumbs up to Umairah’s single Fitrah.

Siti also revealed that she had her very own vlog channel on YouTube since last year, and it has had more than 220,000 subscribers.

“It’s specially for fans who want to get to see me and my loved ones on special occasions, and my meets-and-greets with longtime fans and friends off-stage,” she said.

“Who knows, one day I might have a documentary-film about my musical journey, like those involving Michael Jackson and BTS, and it can easily incorporate interesting bits from my vlog channel.”

BEYOND THE DIGITAL REALM

Shopee regional managing director Ian Ho said Siti had been one of their strongest supporters from the start.

“We have always been big fans of Siti, when SimplySiti decided to open its official store on Shopee, we were barely a year old.

“Fast forward to today, we have been tasked with the great honour of bringing the SimplySiti brand to the next level of growth.”

“Brands like SimplySiti are a great example of how CIMB, through its extensive financial and partnership offerings, can help SMEs grow their business in a competitive retail environment,” he said.

All prices in Malaysian Ringgit (RM / MYR). All prices above will subject to Malaysia Service Tax at 6% commencing 1 September 2018. The information contained on this website is for general information purposes only. The information is provided by beausiti.my and while we endeavor to keep the information up to date and correct as much as possible. When you visit or interact with our sites, services, applications, tools, or messaging, we or our authorized service providers may use cookies, web beacons, and other similar technologies for storing information to help provide you with a better, faster, and safer experience and for advertising purposes. Use of this Site is subject to express terms of use. By using this site, you signify that you agree to be bound by these Universal Terms of Service.